Episode 95 | Thriving Through the Mess

BROUGHT TO YOU BY

Episode 95 – Thriving Through the Mess

Being an entrepreneur is one of the hardest things we will ever do, but we love it! So, how do you keep pushing forward during those times when you feel like quitting? Our expert, Peter Wright, has been through some really hard times and has some excellent advice for thriving through the mess of entrepreneurship and life.

“Adversity causes some men to break; others to break records.” – William Arthur Ward 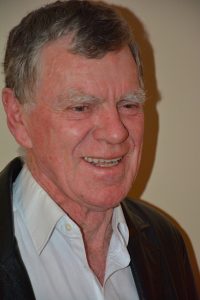 “Building a business is so hard! I started out with all of this Gung-ho attitude but I seem to be losing my desire to keep going. So much struggle every day. How can I lift myself back up on the proverbial horse and keep going?”

Peter tells entertaining stories from his unusual experiences living and traveling widely in Africa for most of his life. Speeches focusing on resilience, perseverance, endurance, determination, happiness, achievement, goals, and success. He also talks about his return to active church membership after an absence of over 40 years.

Born in London, England, Peter Wright moved to Rhodesia as a young boy. He spent his teenage and early adult years living under sanctions and served 10 years as a part-time soldier during the terrorist war.

He lived for 14 years in South Africa before returning to Zimbabwe as Rhodesia had become. After losing his farm and being arrested and imprisoned during the illegal farm invasions in 2002, he moved to Canada with 2 suitcases, a horse saddle, 6 cats, and no money.
Peter is a survivor of extreme adversity, a former corporate marketing manager, business owner, ultramarathon runner, a farmer in Africa. Horse owner, blogger, speaker, podcast host, and a heart attack survivor.

His background allows him to provide a different perspective to situations and inspire audiences to think critically about life, overcome challenges, and find happiness within themselves.